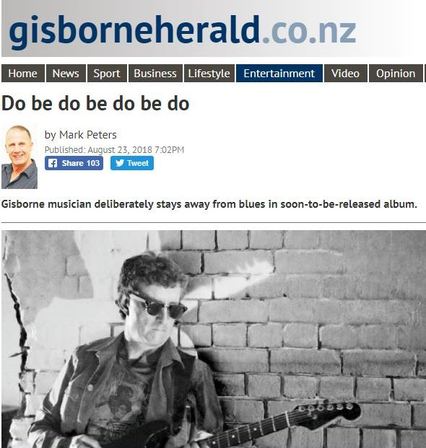 KNOW THYSELF: Known for a long time as a blues player, Gisborne musician Ernie White took a leap of faith in his songwriting to develop a pop rock sound in a collection of original songs he has recorded and are in the final stages of production.

Most of us know Gisborne musician Ernie White as a blues player. Others know him through his day job. But the bluesman turned pop-rock recording artist knows himself as a musician first — hence the title track of his soon-to-be-released album, I Know (You Don’t Know Me).

Even before its final polish the album is a full-fat production with slick guitar work, hooky pop hooks, funky beats and wicked backing vocals but you’re going to have to wait until late September for the launch.

White’s change in guitar style happened about eight years ago when a spinal injury resulted in the loss of use of his right arm.

“You approach things in a different way,” he says.

“I started writing lyrics. Until then I didn’t think I had an original bone in my body. But I wrote one song, then another.”

He scoured production studios in various parts of the North Island in search of a producer who matched his music. His criteria was simple. He wanted honesty.

“If a song was crap, or if I wasn’t playing well enough, I want to know. The other thing is, it’s all about the song. It’s not about my ego.”

He found his man in Tauranga.

White doesn’t want to name his producer or the guest artists on his album just yet. The reveal is part of his publicity strategy. His plan to record an album included branding, a music video and a place on music streaming service Spotify.

The Gisborne musician went into the studio with 23 original songs he felt were recordable. From the 23 he selected 11 and asked the producer to select 11. They differed over three songs but White had faith in his producer.

“He felt his three choices could be developed. I went with his call. For two of the songs I wasn’t convinced during the process they would work.

When asked what other musicians he would like on the album, White chose a musician friend, bass player Brian Franks from Tauranga-based, British-style rhythm and blues band Brilleaux.

Franks was happy to be part of the album.

“He said he would do it just for beer. He asked if I had a drummer. ‘Beano (Ian Gilpin) would be keen’, he said.”

“They nailed 10 songs in one day. Bass and drums are all done.”

A top female vocalist from Tauranga added backing vocals as did another well-known musician who happened to be sharing the studio at the time.

“The producer grabbed him to be part of the business end of the title track.”

For one song in which White struggled with a guitar section, the singer/songwriter stepped aside to let a piano player add a passage.

The decision paid off.

“You write a song but you don’t know what it’s going to end up like when you take it to a recording studio,” says White.

“You never finish a song. There’s always something you want to tweak.”

The most bluesy track is the radio-friendly pop song Why Do You Care which was inspired by a scene outside a New York restaurant in which an elderly lady slipped and fell. The only person to go to her assistance was a homeless man.

Many songs are inspired by his daughters Maggie and Olivia, he says.

“It’s never to late to be the thing you want to be. That’s why I deliberately stayed away from blues.”

White was not long out of school and living in Hamilton when he discovered the blues. He was in a low mood one evening and while walking past a porch where two blokes were having a beer, he heard Eric Clapton’s live version of Double Trouble on their stereo.

The music was an epiphany. He phoned a Gisborne musician friend to say he’d found God.

“At that moment I switched from rock to blues.”

Since then he has toured with Wairoa musician Doug Snelling, played at blues festivals around the country and has performed as support act for Big Daddy Wilson, Ruth Wyand, and Dragon.

He has largely flown under the radar with his music, he says.

“But at some point you draw a line in the sand and ask yourself ‘am I going to do this or not?’”

And now he is.